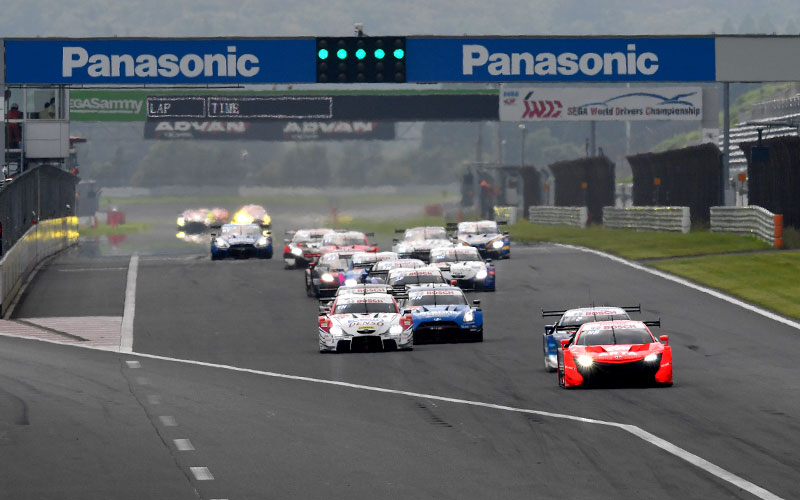 2020 AUTOBACS SUPER GT Round 5 “Takanokono Hotel FUJI GT 300km RACE” gets underway at Fuji Speedway on October 3rd (Saturday, Qualifying) and runs through Oct 4th (Sunday, Race). It is the second half of the season from here and it will not only be about win or lose. Finishing ahead of the rivals to pick up as many points as possible will have more importance subsequently in the title contention, and that will call for more intense battle on the field. Also, this will be a third stop at Fuji. Data obtained from the previous two races would definitely facilitate in increasing the maturity level of the car, which, in turn, allow us to expect a high-level, high-speed battle that can only be showcased on the track of Fuji. In addition, spectators will return to SUPER GT from upcoming Round 5, and the support race FIA-F4 Championship will also start from here. In that sense, this will mark a new beginning.

Before winning the previous race at Motegi, No.17 KEIHIN NSX-GT (Koudai Tsukakoshi / Bertrand Baguette) had already scored its first win of the season at Round 2 held on the same Fuji. It lifted the team to the leading position of the point standing, but it also increased the handicap weight to 86kg, which could become critical for the team at Round 5. For the point leader who is challenging for their first ever title, it would be important to capture as many points as possible and be sure to grab it when the opportunity comes.
After all, the NSX-GT squad this season has been strong on the Fuji track. For the pole-sitter of Round 2, No.8 ARTA NSX-GT (Tomoki Nojiri / Nirei Fukuzumi), upcoming race is a race they would be keen to win, or, even more, a promising opportunity to score a win considering their light handicap weight. No.16 Red Bull MOTUL MUGEN NSX-GT (Hideki Mutoh / Ukyo Sasahara) is also on a roll from the third-place podium finish at the previous race, and they are definitely a team to watch along with No.64 Modulo NSX-GT (Takuya Izawa / Hiroki Otsu). 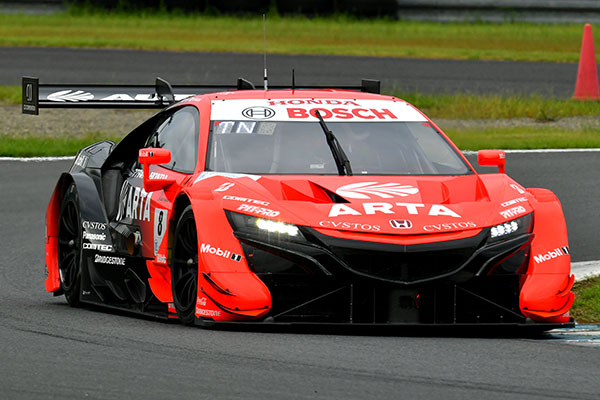 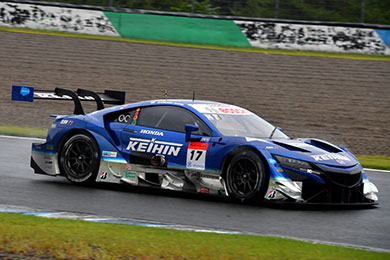 The Toyota GR Supra GT500 fleet dominated the top 5 at the season opening round held at Fuji Speedway, glittered shinier by a pole-to-win by No.37 KeePer TOM’S GR Supra (Ryo Hirakawa / Nick Cassidy). However, the fleet has been letting the rivals to outpace them since then. Consecutive finish in an upper position by No.36 au TOM’S GR Supra (Yuhi Sekiguchi / Sacha Fenestraz) ended at the previous race and the top seat of the point standing was taken away by the No.17 car.
The fleet would want to try to regain the lost ground at the first race of the season’s second half hosted by Toyota’s home Fuji. The leading force of the fleet would be No.19 WedsSport ADVAN GR Supra (Yuji Kunimoto / Ritomo Miyata). Quickness of GT500 young gun Miyata, in particular, is worth giving a close look. Eyes should also be kept on No.39 DENSO KOBELCO SARD GR Supra (Heikki Kovalainen / Yuichi Nakayama) which appears to be back with the toughness the team is known for. Speaking of come back, No.38 ZENT GR Supra (Yuji Tachikawa / Hiroaki Ishiura) should not be forgotten. The team clinched its first pole position in a long while at the previous round in Motegi and finished the race in bittersweet second position, but the speed has returned to the car for sure. The handicap weight on the car is rather heavy at 56kg, but the fans must be waiting to see Tachikawa the “Fuji Meister in Supra” to stand at the highest position at Fuji. 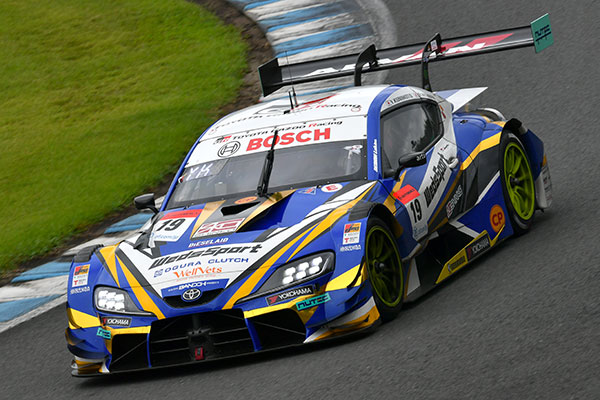 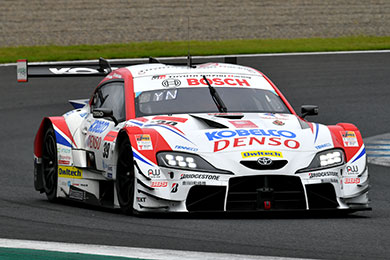 ?Keen for win No.2 of season, can GT-R squad play lead role in 2nd-half?

In early part of the season, it seemed the NISSAN GT-R NISMO GT500 squad was caught in the swamp, but, still, No.23 MOTUL AUTECH GT-R (Tsugio Matsuda / Ronnie Quintarelli) pulled off a win at Round 3 Suzuka and continued to show strong performance, though didn’t turn into a good result, at the previous event, which makes you wonder how the situation in the race would had been if the yellow flag didn’t come out at the closing time of the qualifying.
No.12 CALSONIC IMPUL GT-R (Daiki Sasaki / Kazuki Hiramine) was also showing notable speed when it was fighting its way up in the pack. Unfortunately, they have not been able to balance the speed with other elements for a good result in past races, but the previous event must had brought many positive inputs to the team. Plus, the track of Fuji has been good to the team and the last victory (Round 5 Fuji in 2016) the team celebrated was also here. It could be a shame to have the handicap weight still at 0kg if you consider the season has already reached the midpoint, but, at the same time, it could be the biggest chance too. They would want to take advantage of the current situation and grab a significant result. This is quite an opportunity for No.24 Realize Corporation ADVAN GT-R (Mitsunori Takaboshi / Jann Mardenborough) also in terms of weight handicap. No.3 CRAFTSPORTS MOTUL GT-R (Kohei Hirate / Katsumasa Chiyo) cannot be underestimated either.

In the GT300 class, Q1 of the qualifying has been carried out by splitting the pack into Group A and B this season. The new format has been well-accepted by the teams as well as the fans, and it will also be adopted at Round 5 Fuji. Result of the qualifying is thought to have lesser impact to the race at Fuji than Motegi where the previous event was held, but, still, dropping out in Q1 can cost any teams a Top 10 finish. Fort the teams in the top group of the point standing, in another words, teams with the handicap weight at 100kg-level like No.11 GAINER TANAX GT-R (Katsuyuki Hiranaka / Hironobu Yasuda), No.65 LEON PYRAMID AMG (Naoya Gamou / Togo Suganami), and No.61 SUBARU BRZ R&D SPORT (Takuto Iguchi / Hideki Yamauchi), the strategy would be to pass Q1 and try to pick whatever the point they can pick up, even 1 point, to increase their chance for the title.
In terms of candidates for the Round 5 winner, the list would start with the cars that boast the power and the top speed on the straightway of the high-speed track of Fuji. The NISSAN GT-R NISMO GT3 teams definitely attract attention in that regard. Nonetheless, it may not be so easy for the teams with a heavy handicap weight, but the chance is quite high for No.10 TANAX ITOCHU ENEX with IMPUL GT-R (Kazuki Hoshino / Keishi Ishikawa). After finishing in the second place at the previous race, No.88 JLOC Lamborghini GT3 (Takashi Kogure / Yuya Motojima) does not permit underestimation. We may see dark horse in No.96 K-tunes RC F GT3 (Morio Nitta / Sena Sakaguchi) and No.34 Modulo KENWOOD NSX GT3 (Ryo Michigami / Jake Parsons).?Although struggling this season until now, it could be about time to see No.4 GOODSMILE HATSUNE MIKU AMG (Nobuteru Taniguchi / Tatsuya Kataoka returning to top contention considering its potential.
The wider range of setup of JAF-GT300 cars could enable some cars in the category to run in an upper position especially when this is a third race at Fuji this season. No.31 TOYOTA GR SPORT PRIUS PHV apr GT (Koki Saga / Yuhki Nakayama) could be taking its second pole of the season backed by its hybrid power. A light handicap weight may benefit No.6 ADVICS muta MC86 (Ryohei Sakaguchi / Kazuto Kotaka), and, if so, the team could become an interesting player in the competition.

8-event 2020 season is already entering the second half with the Round 5 “FUJI GT 300km RACE”. The event will finally be held with spectators in presence at the circuit, and the direct cheer and support from the fans will for sure give more power and courage to the drivers and teams to challenge in intense battles.
Of course, there can be many fans who cannot be at the circuit due to the limitation set on the capacity. Excitement of SUPER GT can also be enjoyed at full through the broadcast by J SPORTS on live, on demand, and recorded program, the SUPER GT Plus, a TV program broadcast via the network of TV Tokyo, or the official app (all channels offered only in Japan. For overseas, it will be viewable by The Race, a YouTube channel), so don’t miss it wherever you are.