After the domination of the new Toyota Supra at the opening round, Honda have fought back to take pole for today’s second round of the Super GT at Fuji.

Pole position was taken by Nojiri in the No. 8 ARTA NSX-GT (Tomoki Nojiri /Nirei Fukuzumi). In the GT300 class, it was Kotaka in the No. 6 ADVICS muta MC86 Ryohei Sakaguchi/Kazuto Kotaka) that took the class pole.

As with the preceding season opener here at Fuji Speedway, the event is being held without spectators. However, while the qualifying and the race were held on the same day in that opening round, this time the qualifying was held on Saturday with the race scheduled for Sunday as in years past. With most cloudy skies overhead, the track condition for the qualifying was dry. And, although it was not the kind of fog that limits visibility, the air over the circuit was slightly misty.

The GT500 class Q1 session started at 3:03 in the afternoon. All 15 participating GT500 cars ran in the same 10-minute session, from which the fastest eight cars would qualify for Q2. In the last minute of this Q1 session, all the cars began their final time attacks. It was the No. 100 RAYBRIG NSX-GT (Tadasuke Makino) that recorded the fastest time of 1’27.328 to stand in a tentative pole position. The second fastest time went to the No. 39 DENSO KOBELCO SARD GR Supra (Yuichi Nakayama). Third position went to the GT500 rookie Kazuki Hiramine in the No. 12 CALSONIC IMPUL GT-R. As for the winner of the opening round, the No. 37 KeePer TOM’S GR Supra (Ryo Hirakawa), it failed to qualify for Q2 by placing 10th.

In the 10-minute Q2 session to decide pole position, the eight qualifying cars waited to the last minute before making their final time attacks. Here, the top time of 1’27.300 was recorded by ace driver Tomoki Nojiri in the No. 8 ARTA NSX-GT. Just after that, Kohdai Tsukakoshi in the No. 17 KEIHIN NSX-GT fell just short of that top time with a lap of 1’27.459. Another NISSAN GT-R NISMO GT500 car, the No. 12 CALSONIC IMPUL GT-R driven by Daiki Sasaki moved into 3rd position. But then at the last moment, the No. 39 DENSO KOBELCO SARD GR Supra beat No. 12’s time to claim 3rd position. The driver of No. 39 who managed this feat competing in his first GT500 event was Sena Sakaguchi, who took the place of the team’s ace driver Heikki Kovalainen, who was unable to be here in Japan due to coronavirus related travel restrictions.

“In Q1 the car was not performing up to it usual potential in some areas. But since Fukuzumi-san was able to give a good assessment of the car’s performance after driving in Q1, I found nothing to complain about with the revised performance when I drove in Q2.” said Nojiri.
“I want to express my appreciation to the team and Honda for getting the car in such good condition, and also all the other people who have supported us. In the season opener, Fukuzumi-san finished first in Q1 with a course record, and I was a little slower than that in Q2 and failed to get pole position. Having experienced that embarrassment of being beaten by my own teammate, I concentrated on improving on that performance here in Round 2. I think the things I worked on in the interim paid off today. Since the important thing is tomorrow’s race, I want to work with Fukuzumi-san and the team to maintain this lead and win.”

The GT300 class Q1 was run in two sessions for Group A and Group B. In Group A, the No. 61 SUBARU BRZ R&D SPORT (Takuto Iguchi) finished fastest, while the fastest in Group B was the No. 2 SYNTIUM Apple LOTUS (Masataka Yanagida). The following Q2 session was contested by the eight fastest cars from the two Q1 sessions, for a total of 16 cars. It this Q2 session it was two SUPER GT rookies who showed their speed. The class pole position was a felicitous first pole for Kazuto Kotaka driving for the first time this season as a regular for the No. 6 ADVICS muta MC86 team. Just 0.1 sec. behind Kotaka came another rookie competing in his SUPER GT debut season, Toshiki Oyu in the No. 55 ARTA NSX GT3. Finishing in 3rd position was veteran Hiroki Katoh in the No. 2 SYNTIUM Apple LOTUS. 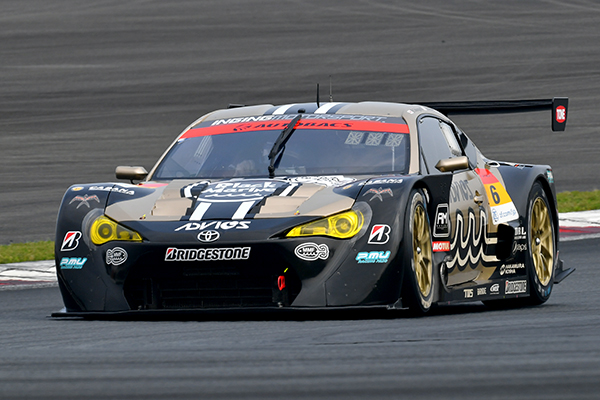