The qualifying for the FUJIMAKI GROUP SUZUKA GT 300km RACE, Round 3 of the 2020 AUTOBACS SUPER GT series took place at Suzuka Circuit in Mie Prefecture on August 22 (Sat). In the GT500 class, the No. 64 Modulo NSX-GT (Takuya Izawa/Hiroki Otsu) won pole position, which for Izawa was a personal first PP in his 13-year GT500 career. In the GT300 class, the No. 31 TOYOTA GR SPORT PRIUS PHV apr GT (Koki Saga/Yuhki Nakayama) won pole position. These two cars will start at the front of their respective classes in tomorrow’s race starting at 1:00 in the afternoon.

As with the last two rounds of this season, the qualifying here at Suzuka Circuit was held without spectators. But the competition was every bit as intense as the mid-summer heat. At the time the qualifying sessions started at 2:20 in the afternoon the skies were clear, and the air temperature was 33 degrees Celsius. The track was of course dry, but the track temperature was a very high 48 degrees C.

The GT500 class Q1 qualifying session started at 3:03. All 15 GT500 teams ran together in this 10-minute session, from which the eight fastest cars would move on to Q2. Due to the high air and track temperatures, however, the teams could most likely get the best possible grip from their tires for only one lap. Here it was the No. 64 Modulo NSX-GT (Hiroki Otsu) that had also been the fastest car in the morning practice, that ran the top time of 1’46.160 to move on to Q2. Running the second fastest time in this session was the No. 23 MOTUL AUTECH GT-R (Tsugio Matsuda), which had already installed its second of the two engines that are allowed in the season’s eight rounds. The third fastest time went to the No. 38 ZENT GR Supra (Hiroaki Ishiura), which meant that cars by all three makers stood closely timed in the top three spots.

The fastest eight cars from the Q1 session then competed for pole position in the GT500 class Q2 session. Here again it was the No. 64 Modulo NSX-GT that showed its speed when Takuya Izawa recorded a top time of 1’46.239 to win his first personal pole position since his GT500 class SUPER GT career began in 2007. Finishing the qualifying in 2nd position was the No. 23 MOTUL AUTECH GT-R, which showed its magnificent speed once again in the hands of Ronnie Quintarelli. Qualifying 3rd was Tachikawa in the No. 38 ZENT GR Supra (Yuji Tachikawa/Hiroaki Ishiura), who once again finished in the top three, even if he wasn’t able to add to the record he holds for most individual pole positions. These results mean that the start of tomorrow’s race will see a Honda NSX-GT, a NISSAN GT-R NISMO GT500 and a TOYOTA GR Supra GT500 starting from the three front positions on the grid to compete for the win.

?As with the last two rounds, the GT300 class Q1 session was run in two separate groups, A and B. In Group A, the fastest time was recorded by the No. 31 TOYOTA GR SPORT PRIUS PHV apr GT (Yuhki Nakayama), while the No. 11 GAINER TANAX GT-R (Hironobu Yasuda) put in the fastest time of Group B.
In the Q2 session competed by the fastest eight cars from the Q1 groups A and B, it was Koki Saga in the No. 31 TOYOTA GR SPORT PRIUS PHV apr GT who ran the fastest time of 1’58.189 to win the GT300 class pole position. The 2nd qualifier in 2 was the SUPER GT rookie Oyu driving the No. 55 ARTA NSX GT3 (Shinichi Takagi/Toshiki Oyu), while the 3rd qualifying position went to the No. 244 Takano-no-yu RC F GT3 (Rintaro Kubo/Atsushi Miyake) that is competing in GT300 for the first time this season. 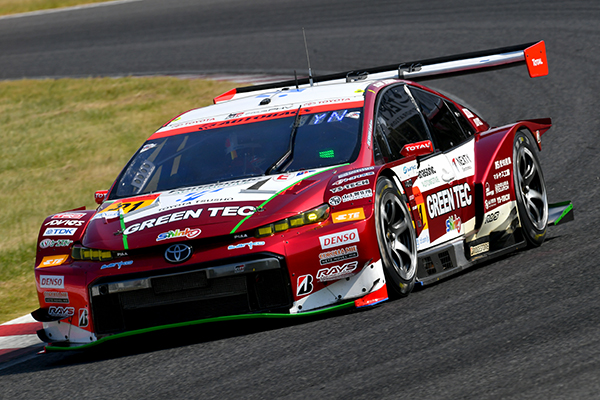 Milesi The Man At Spa. Watch the 4 Hours of Spa LIVE

Watch The 24 Hours of Barcelona LIVE

The Road To Le Mans: The Le Mans Cup Race 2